It is with deep sorrow sorrow and sadness that we announce the passing of our best buddy and bass guitarist extraordinaire, Tommy Biondo.   Tommy suffered a heart attack on September 6, 2020, and he peacefully passed away on Wednesday, September 23, 2020.   He was loved by all and will be deeply missed.   Rest In peace our brother and friend.   You will be playing with some real stars now.   See our two tributes here, Tommy Biondo Tribute, and Tommy Biondo Tribute 2.

Don't miss this 2020 holiday tribute video recorded by Tommy's good friend, Bill Rohde, Christmastime.  The soundtrack song is the Band's perennial holiday favorite, It's Christmas Time (Around the World).  It's an original song written by Tommy and recorded by the band in 2005, at Star Trax Studios.

Also, we recently added a new page above titled Mister B.  It contains songs and projects from both Tommy and Steve pre-Wrong Boys, circa 2000-2002.  We also revamped the format of our other song pages along with adding many more tunes  All in, there are over 250 songs recorded as the Wrongs Boys, including some individual projects, covering the past 20 years.

Albert D. Caiafa:  It's been six years now since he passed away (12/24/14).  Few words can express our sadness at the loss of our friend.  He loved the band and we loved him. Check out our personal tribute to Al, altribute.

The Wrong Boys are a veteran Chicago area rock-n-roll band with related roots throughout the family tree of Chicago rock-n-roll.  Their song list includes a variety of over 100 standard rock-n-roll covers from the 60s to present day.    All are songs you heard on the radio at some time in your life.

Go to "Club Songs" (songs you might hear live) or "Studio Songs" (special studio-only projects that you won't hear live - but fun anyway) for a sampling of recently recorded tunes.  Next, go to the Holidays Songs page for your favorite Christmas and other holiday songs.  Then, check out a new page titled Mister B.  That page features early recording projects by Tommy and Steve pre-Wrong Boys.

Or if photos are your thing, go to "Band Photos" for some cool pictures - special thanks to Lenny Daukus, the official photographer and video/DVD producer of the Wrong Boys.  Don't miss "Fan Photos", either.   You may see yourself!

Also, don't forget to check the "Calendar" and "Band Updates" buttons for upcoming gig and band news. Plus, check the "Videos/Links" section for some Wrong Boys videos and links to other related sites.   And for a real blast from the past, check out the "Past Bands" section - it includes recordings (some quite raw) from bands preceding the Wrong Boys such as The Ants, Scraps, and the Theatre Band.

Also, special thanks to DJ Mike McKenna for playing our songs on the Mike McKenna Radio Show on WCEV 1450 AM. And an extra extra special thanks to Nancy Staszak who is so understanding and patient when the Boys take over her house for rehearsal!   Can't forget a big THANKS to Bill Rohde for his video work on the Promotional DVD and on Guitars vs. Terror.   Thanks Bill!

And now, we are pleased to announce, the Wrong Boys are on Facebook. Yes indeed. Check 'em out at the link up above.  Be a friend.  Rock on!

Rehearsals are every Friday night with lots of friends, beer, and fun!  Special guests who have played and recorded with the band include Al Gattone, vocals and guitar, Larry Roppolo, guitar and vocals, Diane Fligiel, vocals, and Frank Wiencek, guitar and vocals. All songs are recorded live to two track stereo - with some 'lite' editing and dubbing afterwards.

The studio is a typical Windows PC based DAW (digital audio workstation).  Software includes Sonar Platinum Pro as the midi/digital audio sequencer and recorder, and WaveLab Pro 9 as the audio editor and master production mixer (all just upgraded to WIN10).  Hardware includes a Focusrite Scarlett 18i20 USB 2 audio interface, a Roland JV1080 synthesizer, an Alesis Q49 midi controller keyboard, and a Mackie 1202 mixer. Plus an assortment of amplifiers, microphones, Fender guitars, and a Slingerland drum set. It's a simple setup but very functional and efficient. Listen or download a song and see for yourself.

Pics: At House of Blues 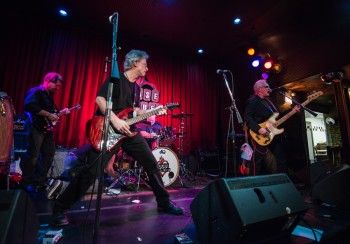 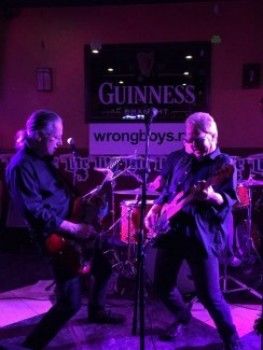